www.electionnightmares.com
Posted by Unknown at 5:38 PM No comments: 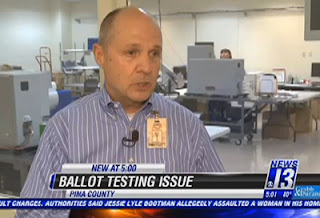 Pima County Elections Director Brad Nelson gave a specific reason for why his elections operator broke a cabinet security seal and attached an ethernet cable to the elections tabulation computer. We know this because KOLD's Barbara Grihalva stated on October 28th:


"Now we're told the worker had gone into the cabinet yesterday to zero out the machine so real ballots can start to be counted today."

We can deduce that Brad Nelson gave this reason for the breach. Especially when he told Pima County Supervisor Ally Miller the same thing.  The only problem is that the tabulation computer was zeroed out at 10:31 AM, which is just after the Logic and Accuracy test. The election worker broke into the tabulation computer much later that day at 3:03 PM.

You could see it at the following link:

Should this page disappear, click here for a capture in pdf format.

We welcome any open source style of investigation to reaffirm or disprove what we are looking at.  Feel free to weigh in at the comment section below.

In the interim, enjoy Barbara Grihalva's new low in 'nothing to see here' style of reporting.  She had brushed aside AUDIT AZ's John Brakey (the citizen who discovered the breach in the first place and immediately contacted Brad Nelson) to get her information from Brad Nelson and the two party election observers who never saw it happen.

Posted by Unknown at 6:41 PM No comments:

We can guess Pima County Administrator Chuck Huckelberry is referring to John Brakey, who caught them fiddling with another bond election last Thursday.  Yesterday they locked the observation room to prevent anyone (especially Brakey) from seeing the monitor that is prominently displayed for the purpose of transparently showing to the public the electronic procedures in the tabulation room.   Quite an admission of guilt considering the public service Brakey had provided last Thursday.  He had informed Brad Nelson about his nine-year employee breaking a seal and inserting an ethernet cable into what was intended to be a stand-alone machine.  Nelson was obligated to call the more docile, innocuous elections observers back so they can redo the Logic and Accuracy Test.  He should be grateful because that is consistent with his excuse that the breach was an accident.  Of course, he isn't grateful because it was obviously no accident.

Enough with the present shenanigans.  Let's take a look at how Chuck Huckelberry attempts to revise the past:

Pima County Administrator's recent letter to the editor of the Arizona Daily Star:

This responds to a recent letter to the editor asking whether Supervisor Ally Miller is correct that there was never any verification of the 2006 Regional Transportation Authority (RTA) election. Supervisor Miller is incorrect. A conspiracy theorist suggested the county flipped the 2006 RTA election. After an investigation by the Arizona attorney general, who hand-counted every ballot cast for that election, the results were the same. A complete hand count of every ballot by the Arizona attorney general is the best verification that these election results were correctly reported. To suggest otherwise is simply political grandstanding with the intent to deceive and mislead voters.

Huckelberry: If it was a "conspiracy theorist" that caught your Elections Division rigging the RTA election, why would you then spend millions of taxpayers' dollars after Goddard's recount to prevent a simple forensic exam of the ballots?

Goddard alleged in his press conference that they did such a good job, they found 63 additional ballots. Evidently, this was supposed to distract the public from the fact their count was missing four precincts' worth of ballots.

Attorney General Terry Goddard clearly moved beyond what is considered 'executive discretion' and served in some capacity to ensure Pima County's right to commit election fraud.For more information:
andhttp://fatallyflawedelections.blogspot.com/.../elections...Time for Huckelberry to step down.
Posted by Unknown at 4:54 PM 3 comments: 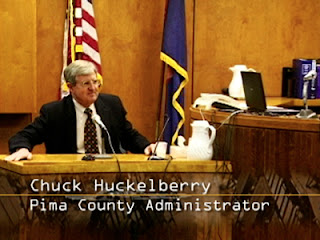