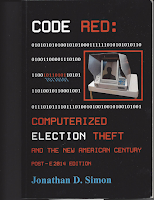 
It’s now been 13 years since “HAVA” Help America Vote Act gave states $3.9 billion in subsidies to modernize their voting rolls and election equipment, which resulting in installing Hackable electronic voting machines. As of 2012, 95 percent of the country’s voters were voting on electronic touch-screen machines, or on optical scanners. Computer programming is the province of small elite private programmers and/or corporations who work in the shadows beyond the reach of public records request: http://fatallyflawedelections.blogspot.com/2015/03/william-e-doyle-hidden-de-facto.html

All theses electronic voting machines use programs that enjoy copyright protection from public scrutiny, not secure from hacking and there is ample evidence that voting machines can be hacked and here is ours in Arizona! Attorney Bill Risner disclosure statement filed with court Jan 12, 2012, which is a mind blowing, comprehensive statement of facts collected over many years of investigating and litigation of Pima County: http://tinyurl.com/LPFiling

In Tucson, AZ we won 3 court cases to collect the evidence; nevertheless at the end, after 8 years, they would not allow us to present the evidence in court. Pima County Elections programmed the memory cards to rig the outcome of a $2 billion bond election in May 2006. I refer you to this summary article after the Maricopa Appellate Court denied our appeal: http://fatallyflawedelections.blogspot.com/2014/07/elections-remain-compromised.html

Also please watch this short video that shows how the precincts’ memory cards can be pre-stuffed with votes and still produce a zero tape before the 1st ballot is ever counted: http://youtu.be/tYbC9KtGxSg

The Diebold, GEMS/AccuVote machine that in 2012 was in use in 20 states by more than 26 million voters was hacked into by a team at the U.S. Department of Energy’s Argonne National Laboratory, which concluded that anyone with $26 in parts and an eighth-grade science education could manipulate the outcome of an election, according to Collier. Team leader Roger Johnson called it a “national security issue.” Want proof? Watch this: https://www.youtube.com/watch?v=DMw2dn6K1oI

From the May 31, 2015 forum in New York you can get a great overview from these outstanding panelists: Bob Fitrakis (Ohio shenanigans in the presidential elections and how they were thwarted in 2012). Jonathan Simon (voting machines, and, YES, they’re used to steal elections). Mark Crispin Miller (the media’s role in this). Allegra Dengler (NYS’s voting machines). Victoria Collier (40 years of electoral shenanigans documented by her father and uncle, and how to engage young people). Complete video: https://youtu.be/hbBE3qZUgJc

Our current investigation is on The 'Doyle Anomaly in Arizona!' One guy, “William E. Doyle”, looks to be the Hidden De Facto Statewide Election Director for the last 25 years: http://fatallyflawedelections.blogspot.com/2015/03/william-e-doyle-hidden-de-facto.html

History teaches us that elections without public accountability are nothing more than vote-counting in the dark, controlled by a government in the act of choosing itself and its cronies, while picking our pockets. Our message is simple: “We the People”, must have elections that are 100% transparent, with documented ‘checks and balances’ and ‘chain-of-custody’, followed by mandatory election verification! Nothing less! Government can never be the sole verifier of its own secret elections. I bought 20 copies of CODE RED last September and gave them to my co plaintiffs and others in the San Cruz County Public Records case that we won:

clip how voting machine’s memory cards can be programmed to switch votes. Video excerpt from a Panel Discussion on Computerized Vote Theft and the Subversion of Democracy. May 31, 2015 at John Jay College, New York, New York:
https://www.youtube.com/user/AUDITAZ