Goddard: A Compromise We Cannot Afford 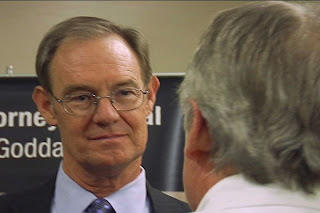 Terry Goddard has failed in his most important case as an Attorney General. Why should we promote him to governor?

You might have been aware of an investigation his office conducted into the 2006 RTA election Question 1 and 2 in Pima County. Here, investigators discovered that the current elections division in Pima County manipulated the electronic database files for this May 2006 election. This discovery ultimately led to the successful three-year lawsuit against Pima County that reaffirmed electronic database files as public records and collected a very large amount of evidence suggesting that the 2006 RTA election was rigged.

Attorney Bill Risner represented the Pima County Democratic Party in this case. When a substantial amount of evidence was discovered, he fulfilled his duty as an officer of the court by reporting this potential crime to Attorney General Terry Goddard.

A reasonable expectation one has when reporting a crime is for law enforcement to contact the person filing the report to find out what happened. This elementary step is especially helpful in complex white collar crimes like the manipulation of data in an elections system.

In the spring and summer of 2007, Terry Goddard chose to do precisely the opposite. Instead of talking to the people who made the discovery so that he could find out what happened and where to look, he began working with the suspects - Pima County. Interviewing the suspects and collecting facts from the suspects is essential. Allowing the suspects to suggest what to investigate, however, invites a huge conflict of interest with a strong potential to manipulate the outcome [pdf].

Did those who first discover and report this situation have an opportunity to point out what they found and explain its significance? Absolutely not. In fact, the results of the first investigation were withheld from the people who made the complaint until the day of the press conference. The suspects, however, were informed of the results of the investigation and given an advance report.

At the press conference, Attorney General Terry Goddard stated that the resulting report exonerated the Pima County Elections division. This was patently false. It was excruciatingly clear that Terry Goddard participated in an exercise in public relations designed to falsely reassure the public about the reliability of the Pima Elections Division and the RTA election itself. It was also evident that, in coordination with local corporate press, a campaign began to undermine the efforts of the election integrity movement by confusing the public further about the issues surrounding this case and casting members of the election integrity group in a negative light.

It was at this moment in time that the Democratic Party was made well aware of what had taken place and of Terry Goddard's role in this activity. There was ample time to choose a more ethical candidate for Governor of Arizona.

Adding insult to injury, Terry Goddard behaved in a similar manner when he finally exercised his authority to examine the RTA ballots in 2009. After years of dragging his feet and denying his authority to examine the ballots in this white collar criminal investigation, Attorney Bill Risner informed Terry Goddard by mail that the Pima County Democratic Party was currently in a civil case to retrieve the poll tapes from that election. These poll tapes are significant because they offer a snapshot signed by poll workers of what the results should be by each precinct. In this letter (pdf), Risner informs Goddard that his client has obtained an expert willing and able to examine the poll tapes for their authenticity and that these poll tapes are with the ballots.

At this moment, before the Pima County Democratic Party can retrieve the poll tapes and examine them, Terry Goddard obtains a secret court order and whisks the ballots away from the secure local Iron Mountain storage facility to an undisclosed location. This chain of custody is monitored by and depends solely on the Attorney General's office for a full month. The public is still uncertain about where these ballots were stored prior to the examination.

Despite countless pleas for Terry Goddard to provide a rudimentary, no-cost, non destructive forensic check of the ballots to see if any were generated with a laser printer, Terry Goddard refuses to perform this forensic check. On the day of his press conference, Goddard acknowledged to the public on the John C. Scott show that he was aware of Pima County violating a court order by compromising evidence in the county vault, so he admits to having probable cause for a forensic exam.

Instead, Terry Goddard hires Maricopa County to perform a "recount" to determine whether the ballots indicate the same results as in the election. No other meaningful audit or examination took place.

Once again, it was painfully clear that Terry Goddard participated in an exercise in public relations designed to falsely reassure the public about the reliability of the Pima Elections Division and the RTA election itself. The poll tapes were then resealed and sent back to the Iron Mountain Storage facility in Pima County. Attorney Bill Risner is continuing to work on behalf of the Pima County Democratic Party to retrieve the poll tapes which are now hung up in the Pima County Treasurer's newly introduced obscure and expensive protocols for examination. It is clear that the Democratic Party is, to this day, being discouraged from looking at the poll tapes, which were very recently and easily acquired from other past elections.

So the recent mass emailed solicitation on behalf of Goddard is problematic. Some elements of the Democratic Party seem to have this idea that it's "better to have our crook in there than their crook". That's not good enough.

It's ironic that Terry Goddard is collecting money for a clean elections campaign when, thanks to his efforts, we will never know for sure who will win his own election.
Posted by Intercept at 12:08 AM