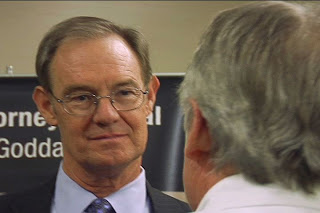 Arizona's Secretary of State's office has issued a surprising answer to Supervisor Ramon Valadez's request for ballot scanning.  Contrary to what has been publicly revealed and analyzed in Arizona Attorney General's public recount of the 2006 RTA election, Arizona's Secretary of State's office issued a memo citing the "accuracy" of Goddard's recount as a reason to forego graphic scanning of ballots.

The key quote in the document is as follows:

"The Secretary of State's office has viewed the idea of ballot scanning as a way to further audit our elections process. However, recent events (the Prop. 112 recount, Attorney General Goddard's evaluation of the RTA election, and the 2012 hand count results) have once again demonstrated that our election machines are incredibly accurate and reliable. Therefore, at this time, I don't believe that it is prudent to spend resources on creating an audit for a process that is already audited."

Perhaps they aren't aware of the chimpanzee hacking the very same GEM's elections system, but we do know that it's incredibly naive to suggest that the need for election audits could only be defined by the potential accuracy and reliability of the machines - not the people running the machines.

So why would the Secretary of State choose to mislead the public with a letter alluding to "accuracy" in Arizona Attorney General Terry Goddard's RTA investigation?

It was Goddard's ill-faited recount of the 2006 RTA election that became part of the legal argument for prospective relief in rigged elections which won an appellate court decision in 2010.

There were so many problems with Terry Goddard's investigation that election integrity groups AUDITAZ and Voters Unite! issued a twelve page report outlining significant discrepancies between the County's canvass and Goddard's hand count. By what measure does the Secretary of State cite Goddard's hand count as sufficiently accurate to forego meaningful audits? We know that federal guidelines require accuracy within a tolerance of 1 in 500,000. Goddard's recount had:

Goddard proclaimed in his press conference that they did such a good job, they found 63 additional ballots. Evidently, this was supposed to distract the public from the fact their count was missing four precinct's worth of ballots.

Attorney General Terry Goddard clearly moved beyond what is considered 'executive discretion' and served in some capacity to ensure Pima County's right to commit election fraud.

When the Secretary of State's office cites Goddard's work as cause to forego graphic scans as a safeguard against election fraud, they are placing themselves in the same camp, especially when Pima County is now the main obstacle to a forensic exam of the RTA ballots.

Terry Goddard's investigation into the RTA election showed early signs of compromise as the suspects in the investigation (Pima County) were given the opportunity to shape the investigation. This took place through Pima County employee John Moffatt, who was afforded the opportunity to make himself an inextricable part of the report created by the independent data firm, I-Beta. Moffatt was also named in the I-Beta report providing many ineffectual tests that were certain to be meaningless in the first half of Goddard's investigation. Since Goddard stated in public that he was aware of Moffatt being caught with his hand in the 'evidence cookie jar',the decision to include Moffatt in this process demonstrates highly questionable judgment. By this time, it was clear that John Moffatt, who works directly under Pima County Administrator Chuck Huckelberry, was responsible for the convoluted logic that ultimately cost Pima County over one million dollars in legal fees resisting disclosure of public records.

These conflicts of interest were so widely publicized it would be difficult for the Secretary of State's office to make a credible claim of ignorance.

The Secretary of State's office should direct its attention to the money being wasted by Pima County as they use every legal measure permissible to stave off a forensic exam of the RTA ballots.

Pima County's Superior court judges have been ruling in defiance of the 2010 appellate court decision granting jurisdiction for prospective relief in rigged elections.

Before any court orders affecting election procedures are issued, the hearing for prospective relief needs to complete the fundamental tasks ignored by Attorney General Terry Goddard. The court must allow for the actual audit of the ballots (comparing, for the first time, one set of numbers to another set of numbers) and a forensic examination of the ballots. In fact, if the audit and forensic exam do not turn up evidence of foul play, the court does not have sufficient cause to issue orders for prospective relief. That outcome would end the case.

So why is Pima County the primary obstacle to this investigation?

All local media outlets fail to articulate this inescapably simple resolution that Pima County avoids. Everyone endowed with basic cognitive skills is left with the uncomfortable realization that Pima County has been caught cheating and they are staving off the inevitable with taxpayer's dollars.

If the Secretary of State's office is so confident in Terry Goddard's investigation of the 2006 RTA Ballots, they should encourage Pima County to stop wasting taxpayers dollars and to stop obstructing the appellate court ruling for prospective relief.  That way, the Secretary of State's office could demonstrate leadership in state elections instead of what appears to be an elections 'circle jerk'.
Posted by Intercept at 8:24 PM 1 comment: