Pima County Judge James E. Marner denied every request by citizens concerned about election integrity in Pima County.  Parroting the previous Pima County judges' claims about the lack of jurisdiction, Marner has paved the way for Pima County to continue subverting efforts to improve election integrity.   Key auditing functions like the simple placement of election returns receipts in election returns envelops (A.R.S. §16-615), incorporating sufficient quantities for hand count audits and the separation of early ballots by precinct will fall outside of any meaningful law enforcement.  One of the main obstacles to improving elections in Pima County is the county's choice to simply adhere to what is legally permissible instead of what truly achieves election transparency.

The appellate court, which looms just above Pima County's insular legal structure, ruled in favor of the court's jurisdiction to intervene when the legislative branch and the executive branch fail to provide an adequate remedy in a constitutional crisis. As Brad Roach stated in his closing arguments in last Thursday's hearing, "To say you don't have the authority because there already been some rules that passed, it fails. It has to fail, because that's what court systems do is make sure state executives and state legislatures follow the state law."

In his analysis, Judge Marner refers to Judge Kyle Bryson's previous ruling over jurisdiction. He attempts to clarify the previous judge's ruling against what the appellate courts ruled:

Citizens concerned about rigged elections know that jurisdiction "ends" once elections are truly verifiable and transparent. Local citizens have introduced very finite measures for this outcome.

The only hope for citizens to restore the integrity of elections within the system is to once again appeal to a higher legal authority. The previous case heard by Judge Kyle Bryson is currently back in the appeals court and will be one of few options for straightening out elections within Pima County.


Various figures of Pima County's legal establishment helping the county preserve their right to cheat in elections. Includes the five judges (Borek, Miller, Marner, Harrington and Bryson) that have juggled the hot potato of election integrity.  Can anybody guess what the green monster represents? 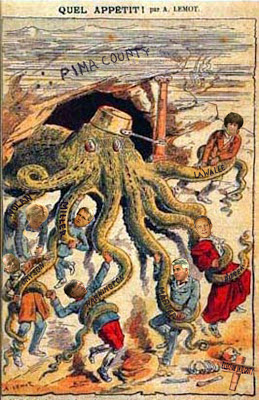 Help Us Transmit This Story